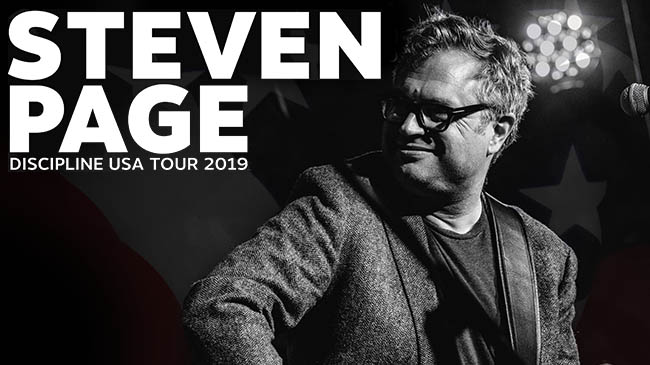 The artist has to ‘keep pushing through’, and it isn’t easy, but Mr. Page has the talent to make that effort worthwhile.

Barenaked Ladies founding member and former frontman, Steven Page’s distinctive and powerful tenor is among the most instantly recognizable voices in popular music. With a strong focus on his own career, Steven Page is busy.

A new album, his fifth solo effort, DISCIPLINE: HEAL THYSELF, PT. II, was released in 2018—a year that saw Steven tour the UK & Ireland and undertake the most extensive US Tour of his solo career.

Since becoming a solo artist, Steven Page has been carving out a diversified niche for himself that expands beyond recording and performing through an exhausting array of projects in music, film, theatre and television. He has composed six Stratford Festival scores, has collaborated and toured North America with Toronto’s innovative Art of Time Ensemble and performs with his rock star pals as a member of the Trans-Canada Highwaymen. Steven journeyed across Canada and the U.S. as host of TV’s The Illegal Eater and became a Chopped Canada Champion in 2017. Steven Page recently appeared in the award-winning Riddle Films production of Dreaming of a Jewish Christmas and is currently working with playwright Daniel MacIvor on a musical commissioned by the Stratford Festival called Here’s What It Takes, a theatre production featuring Page-composed songs.

Still the dynamic stage presence he’s always been, Steven Page is the consummate entertainer, performing music from both his solo career and his BNL years.

Raymond James LIVE at City Opera House is made possible in part by our generous sponsors, the Michigan Council for Arts and Cultural Affairs and the National Endowment for the Arts.