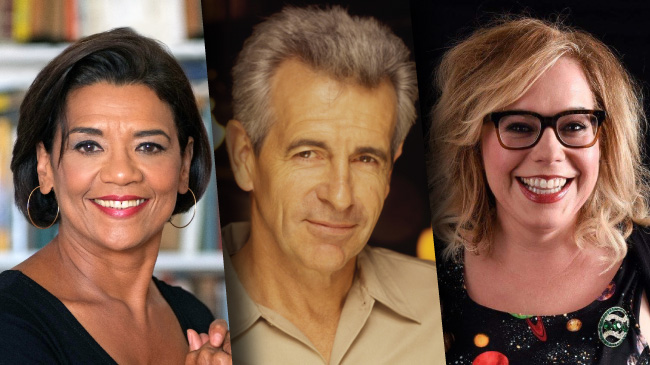 Food, glorious food! Read by actors of stage and screen, Selected Shorts has cooked up a program of fiction to feast on. Full of delectable tales from culinary masters to home cooking mishaps, this afternoon is sure to whet your appetite.

New to Selected Shorts? Tune in to Interlochen Public Radio (91.5 FM) to sample the show. Selected Shorts is a weekly public radio show broadcast on more than 150 stations around the country. It is produced by Symphony Space and WNYC Radio and distributed by Public Radio International.

Sonia Manzano is known to millions as Maria on Sesame Street, and has earned fifteen Emmy Awards as a writer for the show. She is the author of several picture books including No Dogs Allowed!; and The Lowdown on the Highbridge, as well as the middle grade novel The Revolution of Evelyn Serrano and her memoir, Becoming Maria: Love and Chaos in the South Bronx. In 2016, Manzano received a Lifetime Achievement Award at the 43rd Annual Daytime Emmy Awards.

James Naughton has won Tony Awards as Best Actor in a Musical for City of Angels and Chicago. He has appeared in numerous films and television shows, including The Devil Wears Prada, Damages, Gossip Girl, Ally McBeal, Planet of the Apes, Hostages, The Blacklist, The Affair, Equity, Odd Mom Out, The Tap, The Independents, and most recently The Romanoffs.

Kirsten Vangsness is best known as Penelope Garcia on the CBS drama Criminal Minds, Kirsten is also the executive producer and star of the film noir spoof Kill Me Deadly. She is a company member of Hollywood's Theatre of NOTE where her latest play, Cleo, Theo & Wu (which Vangsness wrote and starred in) recently closed and will be going off to Edinburgh in August. Kirsten buses tables and washes dishes at the Blinking Owl Distillery in Santa Ana, California in her spare time.

Auto-Owners Insurance Performing Arts At City Opera House is made possible in part by our generous sponsors and support from Michigan Council for Arts and Cultural Affairs and the National Endowment for the Arts.